Tennessee Titans @ Jacksonville Jaguars (1:25am KO)
This division might actually be the most wide open division in the NFL at the moment, and you could make a case for both teams in this game making the playoffs come January. I really like the progress Jacksonville are making on the offensive side of the ball, Bortles really seems to have taken a huge step forward since last year, and his young set of receivers seem to be making plays all over the field at the moment. TJ Yeldon seems as if he'll play, and he'll be needed in this one for Jacksonville to get the win. On the other side of the ball, Marcus Mariota seems a lot better off since the Titans fired head coach Ken Whisenhunt, and their defence is actually pretty good. In terms of picking a winner, i'm taking the Jags to get the win at home. Primarily because I think this could turn into a shootout, and I think Bortles has more weapons at his disposal. I do prefer Mariota over Bortles, but not his supporting cast. Jags win in a tight game.

Dallas Cowboys @ Miami Dolphins (6pm KO)
The Cowboys finally get Romo back, and to be honest they would have walked the division if he hadn't been injured for the majority of this season. I see them bouncing back in a big way, and if they lose they're pretty much out of the playoff hunt. Lamar Miller should have a solid game against Dallas' run defence, but not enough to get them the victory. Dallas win by 7+.

Denver Broncos @ Chicago Bears (6pm KO)
With Brock Osweiler starting at Quarterback this game is pretty unpredictable. The Bears have been rolling lately and Jay Cutler seems to have sorted himself out in recent weeks, but that Broncos defence will be a real test for him. As long as Osweiler can avoid turning the ball over I think the Broncos should win. This will be another game where I think their defence will have to carry them to get the win, and I think they do. Broncos win in a close one.

Indianapolis Colts @ Atlanta Falcons (6pm KO)
As weird as it may sound, I like the Colts chances of winning more now than Matt Hasselbeck is starting. Luck has been so careless with the ball this year, Hasselbeck is a lot more conservative pushing the ball down the field. I like Frank Gore to have a big game for the Colts, and Devonta Freeman to have a huge day for the Falcons. I think the Falcons win, just because the Colts have no way of stopping Atlanta from running the ball, or for slowing down Julio Jones, but it should be close. Atlanta by less than a touchdown.

New York Jets @ Houston Texans (6pm KO)
The Texans pulled off the upset of the week on Monday Night by ending the Bengals undefeated run, but I can't see them pulling off the upset two weeks in a row. Deandre Hopkins has been a monster for most of this season, but he'll have Darrelle Revis following him all game which should slow him down considerably. I like Chris Ivory to have a big game, as well as both of the Jets big receivers Marshall & Decker. The Jets win by roughly a touchdown.

Oakland Raiders @ Detroit Lions (6pm KO)
I honestly have no idea how the Lions knocked off the Packers last weekend, and this game should tell us whether that was a complete fluke (likely), or the Lions have finally sorted themselves out after under performing all season (unlikely). Amari Cooper should have another big game against that Lions defence, and Stafford will probably throw a pair of interceptions. I like Derek Carr to keep his solid run going, and the Raiders to get the win.

St. Louis Rams @ Baltimore Ravens (6pm KO)
After benching Nick Foles, I don't think Keenum is the answer at QB for the Rams at all. Aside from the set of linebackers the Ravens have, I like the Rams more than the Ravens at every position apart from quarterback. Although I don't rate Joe Flacco highly at all, I see him delivering in this one. I've got the Ravens winning in a low scoring game.

Tampa Bay Buccaneers @ Philadelphia Eagles (6pm KO)
After somehow blowing a big early lead against the Dolphins last week, the Eagles have to win this game. For the Bucs, Winston really seems to be taken care of the ball in recent weeks, but I see that coming to end. The Eagles defence leads the league in defensive turnovers, and I see them getting a couple in this one. However, if the Bucs can take care of the ball they can definitely win, but I see the Eagles getting the win.

Washington Redskins @ Carolina Panthers (6pm KO)
Cam Newton may be the most exciting player to watch in the NFL at the moment, and I can't see the Redskins being the team to slow him down. Kirk Cousins has looked impressive for the Skins at times this season, but the Panthers defence is significantly better than what he's come up against so far. I see the Redskins struggling to move the ball for most of this one, and the Panthers winning by 7+.

Kansas City Chiefs @ San Diego Chargers (9:05pm KO)
I can't decide whether the Chiefs have been really good for the last couple of weeks, of whether they've just been gifted by playing the Lions, and Peyton Manning having the ugliest game i've ever seen a quarterback have. Charcandrick West (that's actually his real name), should have a monster game against arguably the worst run defence in the NFL. Philip Rivers will need to have a big game to keep this close, but I have the Chiefs winning.

Green Bay Packers @ Minnesota Vikings (9:25pm KO)
With their loss to the Lions last weekend, Aaron Rodgers lost back to back games for the first time since 2011, and I think he makes that 3 in a row against the Vikings. I don't trust Teddy Bridgewater all that much, but Adrian Peterson should run riot in this one. He averages well over 100 yards every time he plays Green Bay, and he'll have another big game this time too. Vikings win by a couple.

San Francisco 49ers @ Seattle Seahawks (9:25 KO)
Now that the Niners have finally realised Colin Kaepernick just isn't good and have shut him down for the rest of the season, Blaine Gabbert gets given the unwanted task of leading his team into Seattle. I will honestly be shocked if the Niners score more than 10 points in this game, and I see the game being over by halftime. Seattle win with ease.

Cincinnati Bengals @ Arizona Cardinals (1:30am KO)
Carson Palmer against his old team makes for an interesting storyline, but this game should come down to which defence can hold up the longest. Both teams have a solid defence, and both teams are also capable of competing in a shootout. I'm picking the Cardinals solely because Carson Palmer has experience of delivering in big games, and Andy Dalton doesn't. 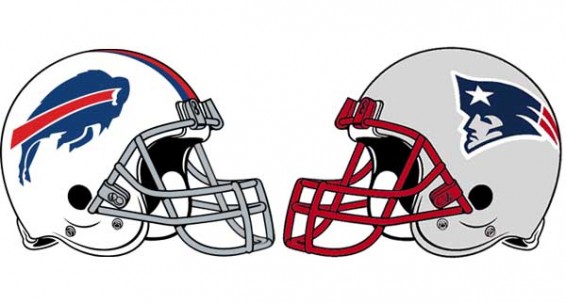 Buffalo Bills @ New England Patriots (1:30am KO)
A lot of people seem to think the Patriots are in trouble because of the losses of Dion Lewis & Julian Edelman, but they seem to forget Danny Amendola is basically the exact same player as Edelman, so there shouldn't be much of a drop off at all. For the Bills, Lesean McCoy should see plenty of carries if the Bills hope to win this game, but the Patriots are surprisingly good at stopping the run. I pick the Patriots by roughly a touchdown.