It was another extremely unlucky weekend for our golf tips. Apart from Kevin Na's performance on the Saturday all the golf tips were rock solid.

Fair play to Charl Schwartzel who was back from a break and performed remarkably well to win over in South Africa. A few of the shots he played on Saturday / Sunday were worthy of the first prize alone and over the course of the four days he showed his class.

In South Africa's Tshwane Open we tipped up Justin Walter and Dean Burmester. Both golfers grabbed a place at 28/1 and 30/1 respectively.

Jimmy Walker was our closest golfer to grab a place at Pebble Beach but he left himself with too much to do on the Sunday. Kevin Na was -6 under at one point but ultimately went to pieces.

Overall it was a small loss on the golf tips last week but we weren't too far away from some massive returns. We look forward to this weekend's action... 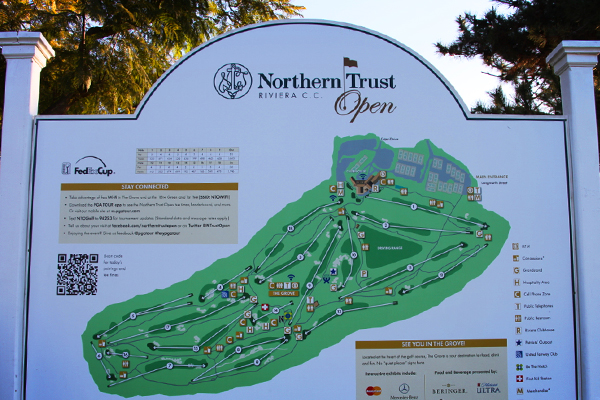 'A faders paradise' is what The Riviera Country Club is often described as due the number of left to right dog legs. The 7,322 yard par 71 opened in 1927 and is usually a tough test. The par-3 6th is famous for its bunker in the middle of the green and the 10th may be the best drivable par-4 in golf. Last year there was a 3-way playoff for the golfers who finished top of the leaderboard at -6 and the eventual winner was James Hahn who sprung a massive surprise, a little like Vaughn Taylor winning last weekend.

The big names are out this week - Rory McIlroy and Jordan Spieth are joint favourites, the Northern Irishman is making his first appearance here and that's one of the reasons I'll be taking him on. Jordan Spieth is a little skinny for me but I certainly wouldn't put you off backing him.

Matsuyama appears after missing Pebble Beach and the man from Japan will be a popular bet having finished T4th here last year. Throw in the fact that Hideki Matsuyama is going for two wins in a row after beating Rickie Fowler in a playoff and the 16/1 on offer looks rather appealing.

Bill Haas is a golfer that I've had in mind for this competition for a while. I backed him last year and he missed the cut after two poor rounds but if you can look beyond that Haas has some cracking course form. In 2011 Haas finished T11th, in 2012 he won this event, 2013 he was T3rd and in 2014 he was T23rd. He played some extremely solid golf at Pebble Beach last week and I fully expect him to put on a bold show here. Haas is accurate off the tee and at odds of 33/1 he would be my main selection.

My other selection for this competition was a straight choice between Matsuyama and Schwartzel. I couldn't separate them for at least a couple of hours. After mulling over it I've decided to stick with the guy who showed wonderful form in South Africa last weekend. Charl Schwartzel had a poor 2015, I explained that in the previous preview but he was superb last weekend. He has a good record here and I'm hoping he continues from where he left off on Sunday. Charl has played at The Riviera Country Club three times and has two top 5 finishes to his name. His performance here last year wasn't the best but he's hoping to put 2015 behind him and he can start by shooting a low score here.

Other golfers to consider are Hideki Matsuyama and K.J Choi.

This a new event at a new venue so without doing any research it's pure guess work as to what type of golfers this tournament will suit. Luckily for everyone reading this betting preview, SpankTheBookies have done all the necessary leg work! I've had a look at the layout and the hole-by-hole guide. I've looked at a few videos and it's likely that this course will definitely suit an accurate golfer off the tee. Some fairways are very narrow and tree's run up either side you definitely want a golfer who can keep the ball straight.

Louis Oosthuizen is one of the class golfers in the field and definitely fits that bill. He was the 39th most accurate golfer off the tee in 2015 and surely he gives us a run for our money at 16/1?! He wasn't great last week but his T7th the weekend before in Qatar proves that he's playing well right now. His front 9 on the last day in Qatar cost him any chance of winning but he still finished -8 over the four days.

My second selection is Soren Kjeldsen. The Dane has three top 10 finishes in his last six European Tour events and is very accurate when taking driver. He was 28th in driving accuracy in 2015 and although he's been slightly below that figure so far this year he can definitely keep the ball in play. Kjeldsen's third round in the Omega Dubai Desert Classic was brilliant and hopefully he can bring that game this week!

Other golfers to consider are Thongchai Jaidee and Rafa Cabrera Bello.